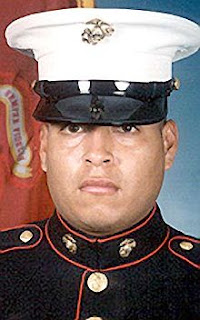 On Tuesday, Nov. 15, Marine Sgt. Rafael Peralta, a former Mexican national who was granted citizenship after joining the military, was on a brief mission as platoon scout in Fallujah, Iraq. He came across a Marine first assult team, about to secure a suspected insurgent house. Not even assigned to the dangerous assault mission, Peralta volunteered his assistance. He was one of the first to enter the house and immediately was wounded in the face by a rifle shot near the front door. As Peralta and other Marines were seeking cover in the house, the enemy rolled a frag grenade into the room. As some of the Marines fled for their lives, trying to break their way through a locked door, Peralta cradled the grenade to minimize the injuries to his new friends. He was killed instantly, but Marines are certain he saved several other lives.

Updated list of coalition deaths
Posted by BW No comments:

As the civilized world quietly rejoiced this morning during the burial of Arafat--author of international terrorism, suicide bombings, plane hijackings, the slaughtering of Olympic athletes, and more--the flags of the once-great nations of Canada and France were hoisted high and unmolested in the chaotic scene of thousands of Palestinians at the burial site in Arafat's Ramallah compound in the West Bank. The time has long passed that we can rely on our neighbors and old allies to identify and fight evil. The number of countries on the side of Good is getting smaller by the day. Fence-sitters like France will have the same fate as their non-combative neutralities in WWII: complete domination by the forces of evil, right up until we arrive and save them. Again.
Posted by BW No comments:

An Air National Guard F-16 accidentally strafed the Little Egg Harbor Intermediate School at around 11:00 pm on Nov. 3 with 25 rounds from its M-61A1 20mm cannon for which an F-16 typically carries 500 rounds. According to available information, the

pilot missed an intended target at a military firing range by some 3 1/2 miles! Coincindentally an ANG F-16 from a different squadron crashed in this very area in January, 2002.

In my hometown in SC, there was speculation that the then-open U.S. Air Force base in Myrtle Beach regularly ran A-10 attack simulations on my rural high school. An A-10 is significantly more deadly to ground targets than an F-16, but I don't recall any live-fire incidents in the area.

As sick as it sounds, there's something funny about an F-16 accidentally strafing a school on American soil. I don't think my disturbing chuckles are because New Jersey is a blue state. Is it?

Could Yasser Arafat be dying of Aids from homosexual relationships?

According to the latest buzz in the blogosphere, CIA, KGB, and former White House speechwriter David Frum ("Axis of Evil") in an article at National Review Online, Arafat has been living a secret life as a homosexual and is likely dying of AIDS-induced liver failure. Arafat's reported gay encounters first began with a teacher when he was a teenager and continued until very recently with bodyguards. 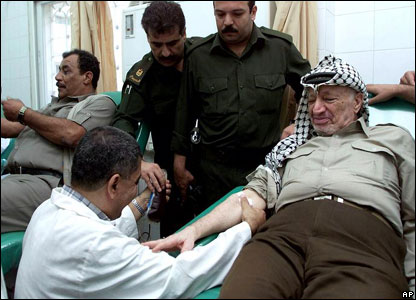 No doubt this would be one of the biggest scandals in the history of the Arab world. According to contemporary Islamic teaching, homosexuality is one of the worst acts under Allah. Whatever credibility Arafat has retained in the Arab world over the past 20 years, it will mostly be lost if this turns out to be true. Of course, if this information becomes public:

2) They will claim that it's part of some elaborate Mossad assassination conspiracy (i.e. Israel gave him AIDS)

This whole situation has the traits of endless conspiracy theories since we will never be told the whole truth. It's in the best interest of insiders who do know the whole truth to keep in under wraps because of such historical implications. Frankly, your best bet for figuring out the truth is to read as many blogs as possible and draw your own conclusions.